This report presents findings for a sample of 3,186 children and their families who took part in the Study of Early Education and Development (SEED). This is a longitudinal study, led by Professor Edward Melhuish of the University of Oxford, that started in 2013 and that follows the same children from age two to seven looking at the impact of attending early childhood education and care (ECEC) upon children’s later development.

Interviews with parents when their child was aged two, three and four asked questions about early childhood education and care (ECEC) and characteristics of the home environment.

Child development at age five was assessed using each child’s Early Years Foundation Stage Profile information (EYFSP) at the end of reception year, as well as through direct assessment of children and teachers’ questionnaires during school year one.

ECEC quality was measured through observations carried out in 1,000 settings attended by a subsample of children in the study.

The report explores whether child development during reception and year one of primary school is associated with:

For full results of the analysis, please read the report here. 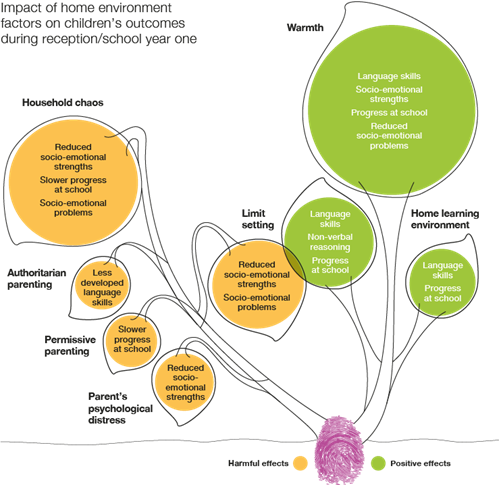 The report also found that characteristics of the home environment have an impact on a child’s development and progress at school as shown in the infographic above.

Click on this link for more information about the home environment factors and child outcomes that were used in the report.